Conrady Junior High School was named winner of the 2017 National Blue Ribbon Schools Award by the United States Department of Education. Conrady was one of only 342 schools across the country to receive the award. That computes to one-quarter of one percent of all the schools in the nation.

Principal Andy Anderson deflected the praise from himself and gave the credit to the team of outstanding teachers, staff and administrators for helping the school win the coveted award.
"This is crazy," Anderson said. "Winning the Blue Ribbon is a direct result of all the hard work from everyone in this building and at the administrative level."
Anderson and veteran teacher Grant Griffith traveled to Washington, D.C. to accept the award.
The national recognition honors and brings public attention to the best schools in the country and recognizes those schools whose students thrive and excel. It coincides with a standard of excellence set at Conrady and throughout the district’s other four schools. That excellence is the result of holding teachers, students and administrators to higher standards.

In District 117, data is used to adapt teaching and learning to support every student. Mutual respect and trust permeate the district to create a culture of collaboration.

For the last 35 years, the U.S. Department of Education has sought out schools where students attain and maintain high academic goals. To be named a Blue Ribbon School is to join an elite group. Of the nearly 140,000 schools in the U.S., just over 7,000 schools have received this honor.

All schools nominated for the award must qualify as either (1) high performing – schools in their states measured by state tests in both reading and math or (2) improvement to high levels – schools that have at least 40 percent of their students from disadvantaged backgrounds and have improved student performance to high levels in reading and math on state assessments.

Conrady received the 2017 Blue Ribbon Schools Award based on its high performance.

In addition to winning the Blue Ribbon Award, Principal Anderson was also named Illinois Junior High School "Principal of the Year" by the South Cook Region of the Illinois Principals' Association. 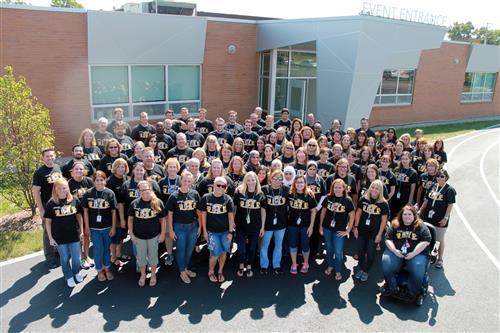